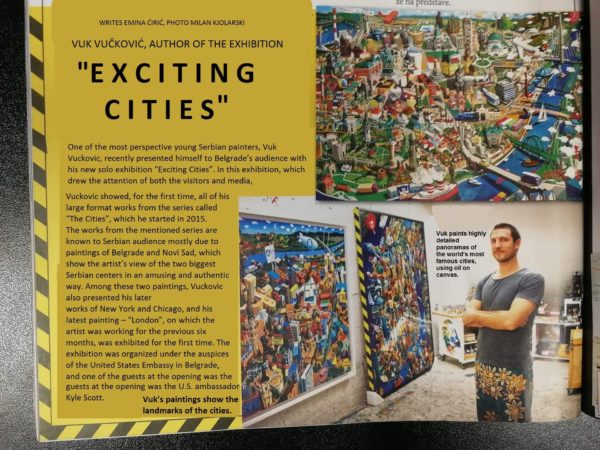 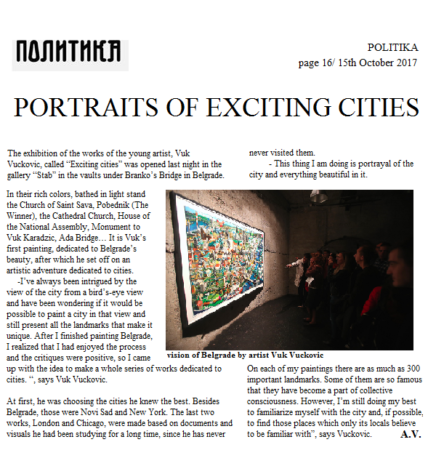 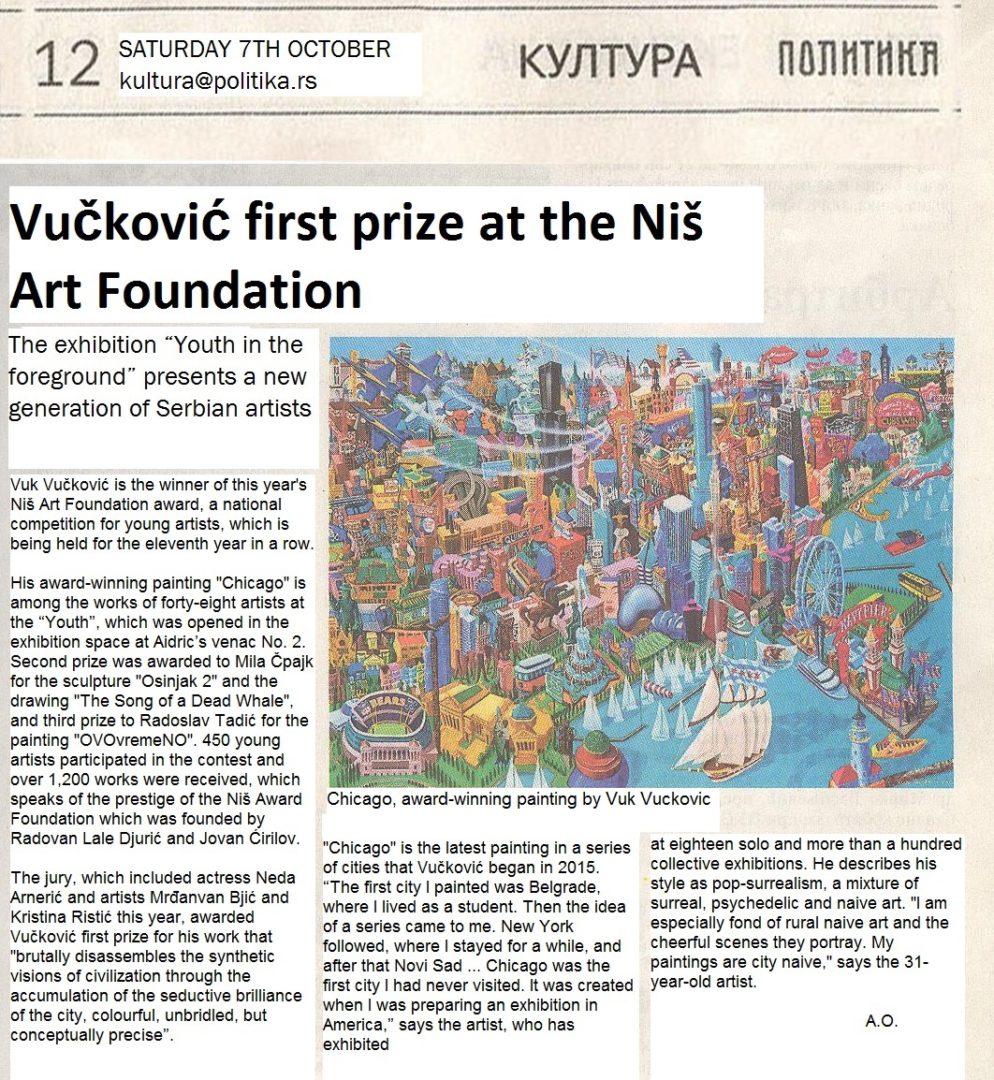 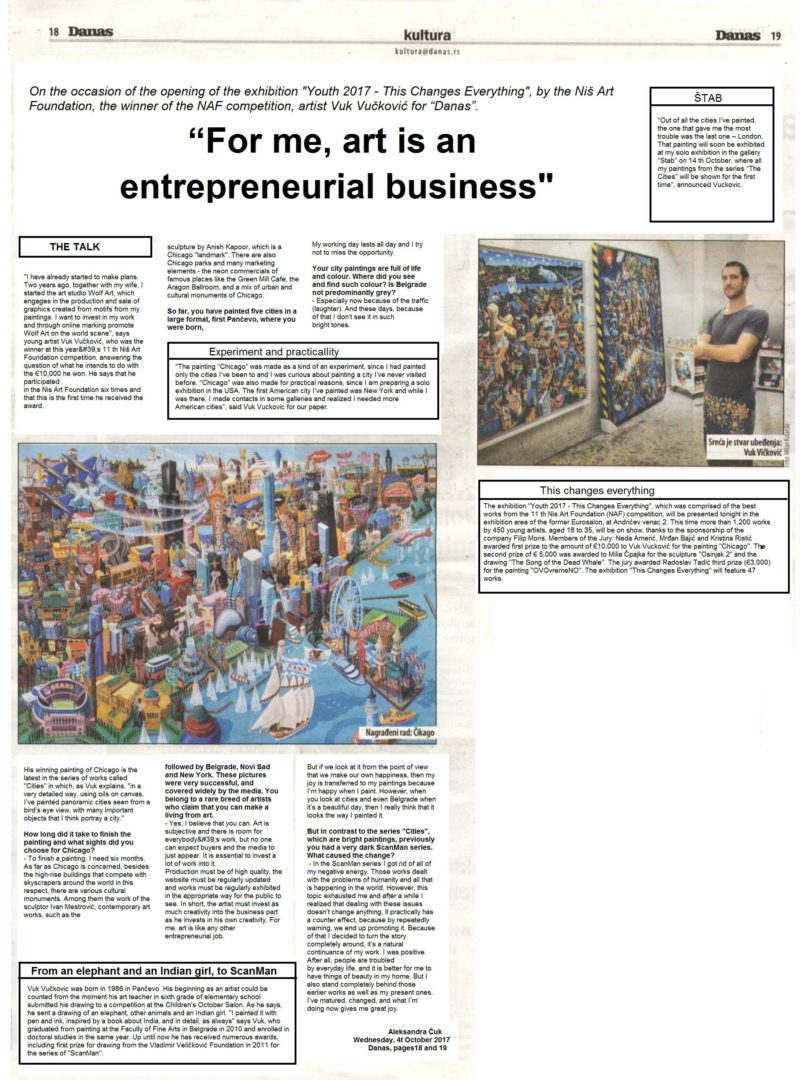 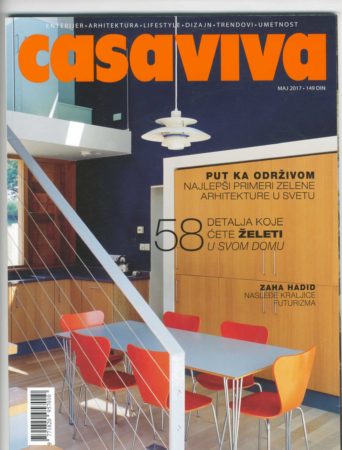 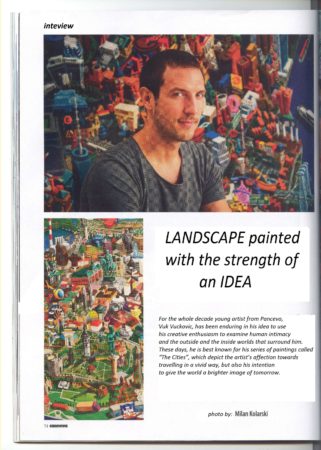 Casaviva, May 2017, page 74, translated from Serbian language by Dejana Parežanin 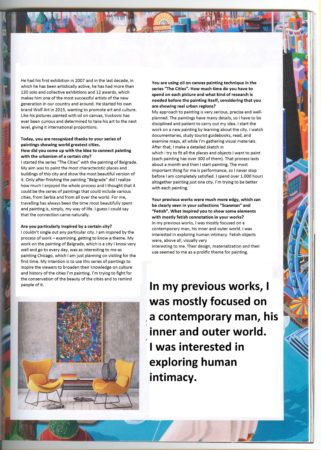 Casaviva, May 2017, page 75, translated from Serbian language by Dejana Parežanin 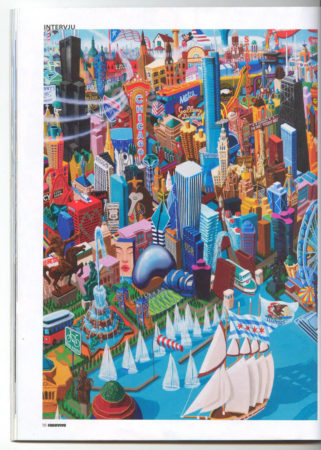 Casaviva, May 2017, page 76, translated from Serbian language by Dejana Parežanin 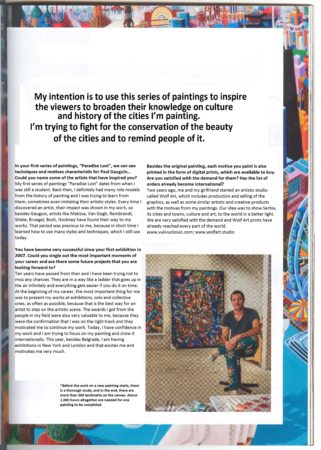 Casaviva, May 2017, page 77, translated from Serbian language by Dejana Parežanin 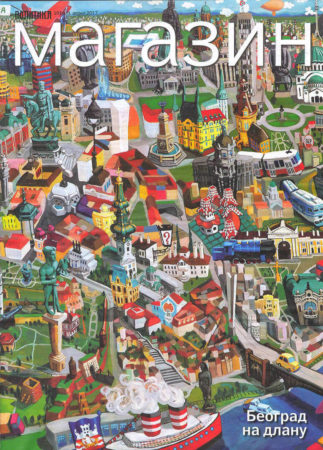 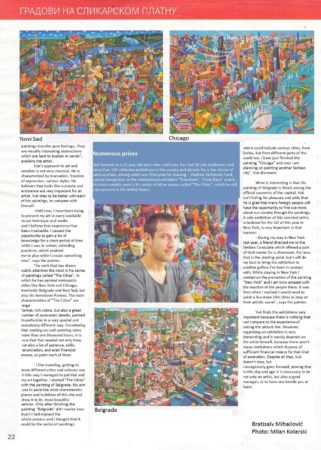 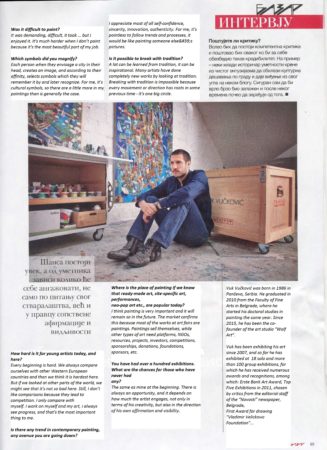 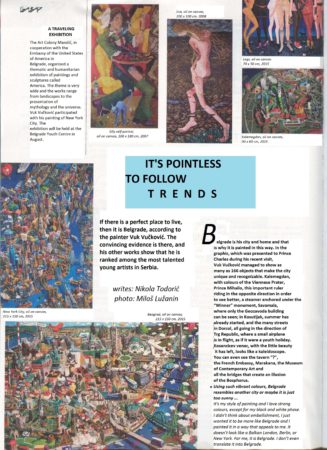 the creator and his subsequent work. In Vučković’s opus, the body is for the artist a general

morphological determinant presented as a pseudo-X-ray, deprived of identity and an instrument

that shows the hidden truth. These portraits, as they are really figures with the characteristics of a

portrait, represent an artistic enigma, as the key for their decryption is exclusively an accessory, a

However, if the portrait is the motive, traditionally one would expect that it reflects the physical

credibility of the person, their psychological character, while in contrast, the author focuses only

on class or social status, the occupation of the portrayed and consequently, deviating from an

established convention, reduces the figure to the lowest common denominator, to the bare human

skeleton, devoid of flesh, sensuality and a certain humanity. The general cold and neutral tone

reminds the viewer of the transience and fragility of our individual destiny. Using the airbrush

technique, one which he has been using since his student days, Vučkovic’s portraits are perfectly

avoiding the trap of this technique, which hyperrealistic painters turn into dingy illustrations.

By giving primary importance to the accessory, subject or clothes which indirectly define the

character, he actually uses one type of metonymy – rebus, which somewhat brings us closer to

the identity of the portrayed.

A further originality of the X-ray is that it shows what is not seen on the surface. In this way, the

artist, by adding to the portrait compromising attributes and associated objects, in the game of

visible and invisible, there is the possibility to point out the falsity and perversity that the

external appearance, clothing or skin – can hide. As a reflection of the era, this work summarizes

its essential features – deformation of the idea of man, the epoch in which anthropocentrism was

born, devoid of humanity, individuality and character, and all in the name of technological and

technical prostheses that have completely mastered human functions. The hallmark of

Vučković’s painting syntax also toys with the meaning of things, and the sociological role of the

object as a status symbol. In these layered works there are equal glimpses of parody and criticism

of the hypocrisy of society, the ironic “scanning” before security control (e.g. airports), bringing

together the spirit of the times marked by terrorism, as claimed by Baudrillard, human extensions

(prostheses) transformations and transgressions of all types .

I love my job
Airbrushes, stencils and colors. A mask, and the game that Vuk plays is all set. With airbrush technique he depicts the reality that surrounds him. And they are his key to understanding the world. The technique he learned himself, and since he discovered it, he abandoned pencils and brushes while the airbrush became his favorite way in expressing himself. Creating his airbrushed works, above all he thinks in a different way.

Among his first works there are some statement drawings of a very polluted area in which he lives and for which he hopes to be improved in the future. Since ever he was active and engaged in the social envelope that surrounds him, and with a group of artists he paved way to awareness actions – through art – on topics such as pollution, garbage, industrial waste.

“Working by always keeping in mind one’s own reference point, trying to always be present”, is one of his guidelines. “Working as an artist is demanding, you should always be able to find that spark that will set you in motion. You need to always push yourself, just like in sports.” And he keeps himself fit for sure: his studio is full of trophies and medals from sports competitions. Triathlon mark on all of them. “For me – he says to me before saying goodbye to us – to be an artist means to have one question in mind: what is the purpose?”
Federika Celini  http://www.pleasedonttell.it/vuk/

If the purpose of painted art is to make the beholder feel uncomfortable, then Vuk Vuckovic, the student of the fifth year of the Faculty of Art in Belgrade, succeeded in producing such effect.

The ever-falling rain did not prevent the audience from coming to the Foyer of the Culture center on the 4th March, 2010, to see the opening of the exhibition named “Factory”. The euthor exhibited his own perspective on the plants, something that the factory-workers come across every day, but paradoxically, Vuk’s vision seems somewhat sinister.Convincingly sinister.
His installations have been exhibited for the first time. Having in mind that previous exhibitions, collective and one individual, included works with classical themes, this exhibition represents a step forward in his artistic domain.

“I made a mutant-exhibition because I belong to the mutant-Chernobyl-generation. I was born in 1986, the year of the explosion of the Chernobyl nuclear plant. In the world of today, in the meantime, everything mutated, and so did painting. You cannot just brush your teeth, you are forced to buy the “3-in-1” toothpaste, which would polish and remove cavities at the same time. In the same manner, an art exhibition is not just an exhibition anymore, but also environmental and a social act, “3-in-1” once more” –Vuk Vuckovic explained, also mentioning his false impression that art only needed to deal with beauty.

According to him, art needs to be socially engaged, otherwise it would die. That is, it died already. That is why he does not believe that the person watching the piece of art should wander into a more beautiful world. Closing up into such a shell is wrong, especially for the art lovers of Pancevo, having sooty industrial plants under their noses.
“If you seriously deal with the history of art, you’ll find that the paintings still worthy after decades and centuries, have always in some way been engaged work. I think that the principle of “L’art pour l’art”is gone. We were taught that principle in school, in the beginning of our time at the Academy, but these stories are exceeded. Such an artist, it seems to me, can not count on having exhibition in the world.”

So, what can Vuk Vuckovic offer to the galleries in the world? The apocalyptic vision of Pancevo in the year 2084, a city consisting of power-plants, pipelines and chimneys. The models of gas-masks, that can be customized according to each person’s character. The plants relocated in the space and time, bursting with unwanted guests, children bound to play in a gassy and smoggy environment…

Born in the year of the Chernobyl catastrophe, the artist was old enough to remember the bombing of Pancevo in 1999. Therefore, it’s no wonder that, in his second exhibition, he stepped away from the previous one, in which his obsessive theme was “Paradise lost”, bright colors, expressionistic images.
One of the paintings that dominated the exhibition was an image of Pancevo as a heavenly town, a metaphysical vision of its layout in ideal conditions. How far it is from the drawing „Pancevo 2084”! Today, the artist’s world is black and white, but most often grey. He hopes that in the future he won’t have to deal with these motives. Vuk Vuckovic is a student of Professor Jovan Sivacki. He is one of the best students in his class. He plans to enroll into doctor’s studies after he graduates. The works exhibited in the foyer of the Culture center can be seen until the 10th March. Having coffee in paradise lost

After an exquisitely interesting and inspiring exhibition of Maja Dedic’s paintings during last and this month, when the guests of the gallery “Café” could enjoy themselves over a drink, conversation and pleasant music, the ambience of this venue was again altered. From the 14th November 19th December, the walls of the gallery will be filled with lively oils on canvas, jute and hardboard, whose author is Vuk Vuckovic, the student of the fifth year of the Faculty of Art in Belgrade.

Vuckovic’s paintings impose a few conclusions even at first sight. First, the themes are exquisitely varied – self-portraits, townscapes, realistic scenery, wondrous bluish “Stairway the sky” lead to the image of the Moon and to the surreal heavenly imagery, completed by the nudes of Adam and Eve.

The coloring is also different from one painting to another. Some works bear alluring and bewitching multi-colors, while some oils are overcome by dark and heavy tones.
Finally, the paintings are rarely of the same format. Some images are megalomaniac-ever-stretching into the height and width, while others are settled into small-dimensioned frameworks. Yet, all of Vuckovic’s works are, apart from the moves of his brush, connected by a very special idea.

– The bond between all the exhibited paintings is in the name of the exhibition – “Paradise lost”. What I’ve painted represents my attempt to answer a series of questions about the purpose of life, which have been my occupation for quite some time. The paradise lost symbolizes the quest for that purpose. I have tried to represent, through the colors and themes, the beautiful and the less beautiful moments in life, the ups and downs, which are the threads that weave life – the author explained.

Vuk Vuckovic had been painting in his early childhood, but he put this form of expressing himself aside and turned to sports.
He started swimming, but was afterwards drawn to triathlon. He became the state representative in this sport. However, in the year 2002, which was, as Vuckovic emphasizes, a crucial year for him, painting returned into his life.

– I was in the second year of high school, and it was time for me to start thinking about my future profession, what faculty to enroll and so on. I was in the department of natural sciences at my high school and I believed that I would, like my parents, decide to study law. However, in that year of 2002, I was enlightened and I realized that I didn’t see myself there. I started spending my time painting again, but with a lot more dedication and with a wish to enroll into the Faculty of Art – Vuckovic says and adds that now, that he is in his last year of studies, he is sure that he did not make a mistake choosing painting as his profession.

The paintings exhibited in the gallery “Café” came to life during this and last year and the proof of the dedication, neverending inspiration and different fields of interest of this young artist is the fact that he is already in the last stage of finishing the material for two more exhibitions (drawings and photographs), which will be available for the citizens of Pancevo to see in the near future.