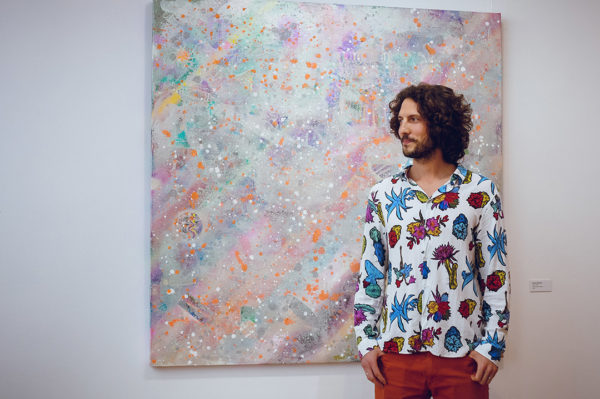 Vuk Vučković was born in 1986 in Pančevo, Serbia. He graduated in 2010 from the Faculty of Fine Arts in Belgrade, where he started his doctoral studies in painting the same year. He has been a member of ULUS (the Association of Fine Arts of Serbia) since 2011. He lives and works in New York City and Pancevo.

Vuk has been exhibiting his art since 2007, and so far, he has exhibited at 24 solo and more than 120 group exhibitions in Serbia and abroad. He has received many awards and recognition for his works, notably: The November Award of the City of Pančevo (2019), the Niš Art Foundation Award (2017), first prize, Erste Bank Art Award (2012), The Five Best Exhibitions in 2011 chosen by “Novosti” newspaper critics, the Vladimir Veličković Foundation Award (2011 ), first prize, special recognition at the  international exhibition “Transform” (2011), and Art Klinika “Perspective” (2010).

Vuk’s works can be found in many important collections of contemporary art, including the Zepter Museum, Telenor, Raiffeisen, Philip Morris, the British Royal family, the Serbian Royal Family, Microsoft Belgrade, Belgrade Waterfront, the Pančevo City collection, and many other private collections.

Digital prints with motifs of Belgrade, New York, London, Chicago, Vienna, Novi Sad and Pančevo, attract customers from all over the world. They have become official souvenirs of Belgrade and Novi Sad, diplomatic gifts of the National Assembly of Serbia and the City Assembly of Novi Sad, the Tourist Organisation of Serbia, the Tourist Organisation of Belgrade, as well as corporations such as Microsoft, Eurocom PR, KPMG, Coca Cola, British American Tobacco SEE, Air Serbia, Telenor, Philip Morris, Skuba, and many more.

2020 “The Best of All Possible Worlds”, (with Petar Sibinović), Gallery ULUS, Beograd

2011 “I graduated from the Art Academy – now I can paint”, Gallery of the Faculty of Fine Arts, Belgrade

2016 “Between Something and Nothing&quot;, Terminal Festival, Museum Gallery, Sombor, Serbia

2013 “What can I not know about you” Gallery ALU, Sarajevo, Bosnia and Herzegovina